Cossack Art Awards on the rise 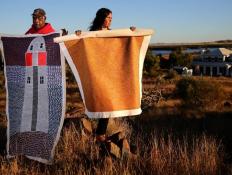 Cossack Art Awards on the rise

Entries to the 2014 Cossack Art Awards have now closed and preparation has begun on transforming the historic buildings of Cossack into a vibrant display of art.

More than 330 entries were received from around Australia making this year’s awards the biggest since they began more than 20 years ago.

City of Karratha Mayor Peter Long said the awards were growing in popularity and quality every year.

“The Cossack Art Awards is fast earning itself a reputation as Australia’s premier regional art prize. Every year it dazzles us with some of the best artwork from the Pilbara and across the nation and this year’s exhibition is sure to be another stellar showcase of outstanding art,” Cr Long said.

“Our region has a rich local arts scene which is well represented again this year. It’s fantastic to see strong participation from the Yindjibarndi and Roebourne art groups as well as increased participation from interstate artists.”

“Of course it’s not just the exhibition that makes the Cossack Art Awards the highlight of the region’s cultural calendar. We have an exciting program of public events throughout the exhibition this year with a range community activities suitable for all ages.”

Presented by the City of Karratha and Rio Tinto, the Cossack Art Awards has grown in size and stature over the years to become the nation’s richest regional art award.

Rio Tinto Rail Operations General Manager Zara Fisher said at Rio Tinto is proud to have supported the Cossack Art Awards since its inception 22 years ago.

“The region has grown to become the country’s resources and industry hub, and at the same time thanks to the continued development of its towns, is also becoming a flourishing community, full of vibrancy, colour and community spirit,” Mrs Fisher said.

“The Cossack Art Awards is one example of how this community spirit and dedication to the arts can result in a long-term prestigious art exhibition, renowned around Australia.”

Family activities will kick off from 10am and run throughout the day finishing with a live kids theatre show at 3pm.

A series of floor talks with judges and local artists will take place during the three weeks of exhibition as well as art workshops and events for seniors.

A special movie night will be held on Saturday 26 July in conjunction with Moonrise Cinema and world-music star Grace Barbe will sing the night away for the second Twilight Tunes this year on Friday 8 August.

Exhibition runs from Sunday 20 July to Sunday 10 August and is open daily to public from 10am to 3pm.

For more information on the Cossack Art Awards visit www.cossack.feelgator.com.

To stay up to date with all Cossack Art Awards news visit and like www.facebook.com/cossackartawards