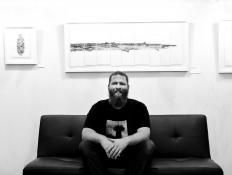 Award-winning Fremantle illustrator Ross Potter will take up residence in the carefully maintained remnants of one of WA’s earliest settlements as part of the 2019 Cossack Art Awards.

The prestigious artist-in-residence program is sponsored by the awards principal partner Rio Tinto and provides an opportunity for a selected artist to immerse themselves in the unique and inspiring surrounds of the historic settlement.

Mr Potter is a well-regarded artist and two-time finalist for the Black Swan Prize for Portraiture, which is considered Western Australia’s version of the Archibald Prize. Last year, he won the City of Melville Art Award drawing award, the Joondalup Community Art Award for works on paper, and was a finalist for the Busselton Art Award and Shirley Hannan National Portrait Award.

Mr Potter has an interest in capturing the heritage of buildings and has exhibited his graphite on paper works as part of the Fremantle Heritage Festival and a National Trust of Australia WA touring exhibition.

In July, Mr Potter will relocate to the heritage-listed colonial pearling settlement for four weeks to produce a series of artworks inspired by his experience living among some of the oldest buildings in WA with a rich multicultural history.

As artist-in-residence, he will also facilitate a series of workshops as part of the public program of events on offer each year during the Cossack Art Awards.

“The annual Cossack Art Awards allow us to showcase our talented local artists alongside works submitted from across the nation,” Cr Long said.

“Through the generous support of our business community, we are also able to shine a spotlight on the Pilbara and promote Cossack as an artistic hub. The artist-in-residence program is an opportunity for an artist to focus on their creativity and I look forward to seeing what Mr Potter produces during his time at Cossack.”

Rio Tinto General Manager Ports Dampier Tim McDougall said Rio Tinto has been a proud sponsor of the awards since 1993.

“We’re committed to promoting arts and culture in the Pilbara region and are very excited to see what Mr Potter produces during his time as artist-in-residence,” Mr McDougall said.

Entries to the 27th Cossack Art Awards are now open, with up to 300 works accepted for exhibition.